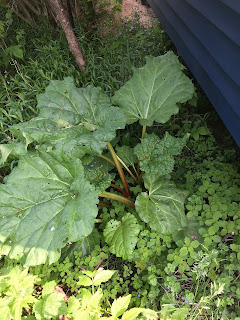 Just because we're standing six feet apart and wearing masks (hello, historic pandemic months) doesn't mean we stop treasuring local history! June is the month when the Waterford Historical Society hosts an annual Rhubarb Festival, which includes many culinary delights made with the humble and sturdy New England "pie plant." We can still celebrate rhubarb online, and hope to share pie with you later.
An aspect of rhubarb that delights family history buffs is the way a clump of it may persist from one generation to the next. Find some next to a stone foundation, and you may savor the same plant where someone harvested the pink and green stems a century ago, or longer. Check out a recipe, and it may be one your grandmother or grandfather used.
Roberta Smith supports the WHS as board member and treasurer. Among her pleasures are rug hooking and baking. Here she shares a recipe for rhubarb muffins that are sturdy and not too sweet, good for breakfast or afternoon teatime. Thanks, Roberta! 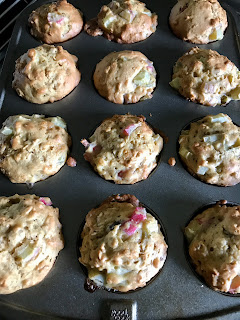 In a small bowl, whisk together:

In a large bowl, combine:

Make a well in the middle of the dry ingredients, pour in the wet ingredients and mix until evenly combined.